History of the Hotel

History of the Hotel

Although the current Cross Keys Hotel was built in 1769, there are documents suggesting that there has been a coaching inn on the present day site since Kelso Abbey was occupied, accommodating all those who travelled to the religious site. This means the original inn could have been built anywhere between the twelfth and mid sixteenth century (when the Abbey ceased to operate.) Historians have suggested that this makes the site and name of the “Cross Keys in Kelso” as the second oldest recorded coaching inn in Scotland. The importance of the accommodation site to the Abbey is implied by the age old logo of the hotel, as the ancient sign represents the Papal See and emblem of St Peter. There are also rumours of ancient tunnels that ran under Kelso town square, which allowed residents of the old coaching inn easy access into the Abbey (although if there were any tunnels, they have long since been filled up!)

The current building was a redesign in the mid eighteenth century by a born and bred Kelsonian, James Dickson, who was born in 1712 in the village of Stichill, a short distance from Kelso. According to local legend, while working as a saddler's apprentice Dickson broke the "Pantwell", or public drinking-fountain in the Market Place, now known as Kelso Square, and ran away to avoid punishment. He set up business as a merchant in London and returned to his native soil in 1760 as a wealthy man. Among the many properties he bought were tenements fronting Kelso Market Place which he rebuilt and converted into a hotel, replacing the original Cross Keys Inn which was situated next door.

The last proprietor of the original Inn was John Waldie, who transferred to the new Hotel until 1784. He ran a coaching business between Kelso and Newcastle and four-wheeled chaises could be hired for 9 pence per mile. The importance of the coaching trade to the newly designed hotel is still evident by the size of the current front entrance to the hotel; the welcoming breadth of this has barely been altered since the eighteenth century, but was such a size to allow horse and carriages to drive right into the hotel. This had two purposes: to keep passengers dry when they alighted, and to give privacy to the famous guests who visited us.

Under James Waldie’s management, the Cross Keys was quickly established as a focus of Kelso's social life. Besides a very large dining room, fine bedrooms and extensive stabling, there was an Assembly Room where a variety of important functions took place, and a Ballroom which was the scene of many grand occasions. John Waldie was succeeded as proprietor by George Horsington, then Adam Main. Main ran a coach to Edinburgh, the journey taking 10 hours in summer and 12 in winter. By 1802, there were three coaches per week and the full distance cost 13 shillings. When James Dickson died in 1771, the Hotel was inherited by his nephew, Admiral William Dickson. In 1803, on the death of the Admiral, the Hotel changed hands and Adam Main was obliged to move out.

Although there had been horse-races in the Kelso area back in 1751, it wasn't until Dickson's time in the 1760’s, that Kelso Races began in earnest. Sir Alexander Don's horse, "Cheviot" won a famous race in 1765. From that time on, the races grew in popularity with the noblemen of the district, and in 1777 they formed a Society called the Caledonian Hunt, which met twice a year. The Cross Keys Hotel was used as a base for race meetings, and Col. Thornton of Yorkshire, visiting in 1786, gave the following vivid description:

"A charming scene of confusion; cooks, ladies' servants, waitresses all running against each other, being the time of Kelso Races. The company is composed of gentlemen of the Turf on both sides of the Tweed with families and friends and also members of the Caledonian Hunt. Foxhounds and harriers hunt alternately in the mornings. There is also a concert and races and next night the gentlemen of the Hunt give a handsome ball. After the ladies retired therefrom, the gentlemen formed a party to drink their healths and when I got up at 8 they were still drinking and meant to sit till hounds went out. This meeting, I heard, is most expensive of any. An English Steward was obliged to pay 10 guineas for his room, though only there 5 nights."

In the late eighteenth century, the Duke of Roxburghe transferred the racecourse from Caverton to Blakelaw, which is nearer Kelso, but this move was unpopular so in 1822, the present site at Berrymoss was chosen. The Incorporated Trades of Kelso, realising the importance of this event to the whole town, helped to transform the rough ground into a racecourse. A grandstand with a weighing-in room was built and there was a Masonic procession to mark the laying of the foundation stone. This grandstand is still in use today. Adjacent to the Cross Keys were the stables where the racehorses were accommodated. In recent memory these stable were run by the Anderson family, but were demolished to form the present car-park.

When Adam Main left the Cross Keys in 1803, he was replaced as landlord by George Yule and his wife Mary. They eventually bought the Hotel from the owners and they too ran a coaching business, with a service to Edinburgh three times a week. The coach left Kelso at 7 a.m. and arrived at the White House Inn, Canongate, at 4 p.m. In winter, the outside passengers sometimes frozen into position and had to be helped down from their seats.

George Yule died in 1814 and his wife four years later. The Hotel was then in the possession of their son, Adam Yule, an ambitious young man. He began to expand by moving into a tenement behind the Hotel, known as "Tweed Lodge", which consisted of a ballroom in the upper storey, a hayloft and school-room in the middle storey, and stables on the ground floor. Adam Yule borrowed money, but was not very punctual in paying his debts and his creditor was obliged to take drastic action to recover the loan: in 1836, the messenger-at-arms, Andrew Drysdale, "passed to the Market Cross of Edinburgh and after crying three several oyesses, open proclamation and publicly reading the written letters of horning and the said execution in His Majesty's name and authority lawfully denounced him (Adam Yule) H.M.'s rebel and put him to the horn by three several blasts." Adam Yule paid up £50 on account.

The arrival of the railway in 1850 badly affected the coaching business, but Yule ran a horse-drawn cab to take passengers to and from Kelso Station. Parties of day-trippers from other towns and cities made their way to the Cross Keys for meals and the Hotel was very much part of all the events which took place in the Square. Adam Yule was still in debt when he died in 1854 and his widow and daughters were left in penury: the Hotel was again put up for sale.

On one of the windows of the Cross Keys Hotel fronting the square, an observer will see "Keddie" inscribed in the glass. This was the name of the man who took over in 1867 as landlord, and who purchased the hotel in 1878. James Keddie proceeded to make alterations to the roof, which had been built in the French style, and added the Italianate facade. Following the refurbishment, Keddie advertised: "Situated in close proximity to the finest Salmon Angling Casts on the Tweed, and being a convenient centre for gentlemen during the Hunting Season, from which the meets of the Duke of Buccleuch's, the Northumberland and Berwickshire and the North Berwickshire Foxhounds may be attended, it is highly suited for the quarters of gentlemen following these sports. The most careful attention is given to the comfort of guests. The Cuisine is attended to with scrupulous care, and the Wines & Liquors are first-class."

Mr. Keddie had three children. His eldest son, David, operated the Friars Burn Brewery in Jedburgh, and his daughter, Sarah, married John Watts and moved to London. When James Keddie Snr died in 1889, Sarah sold her share in the hotel to her younger brother, James Thomas Keddie and he was the owner until his own death in 1917. Sarah repurchased the Cross Keys but sold it again in 1922 to the firm of J&A Davidson. Since then, there has been a variety of ownership, and while there are still a few gaps, we know that the hotel was sold to John Jamieson in the late 1920’s, but at some point during World War Two was sold again to William Younger & Co Ltd. The hotel was then sold to Maxwell Hotels Ltd in May 1946, who owned it until it was most recently purchased by Mr. Kenneth Ballantyne in 1975, whose firm M&J Ballantyne Ltd meticulously restored the hotel over a two year period to bring it back from almost dereliction. As the hotel was listed as a Category B building, each restoration task needed to be vetted by the Scottish Georgian Society and “Historic Buildings” section of the Scottish Development Department. When the hotel reopened on 1st July 1977, the ground floor was primarily made up of a hotel bar and shopping arcade, with the main restaurant, kitchens and ballroom on the first floor, and twenty bedrooms occupying the second and third floors.

The hotel today remains in the ownership of the Ballantyne family. 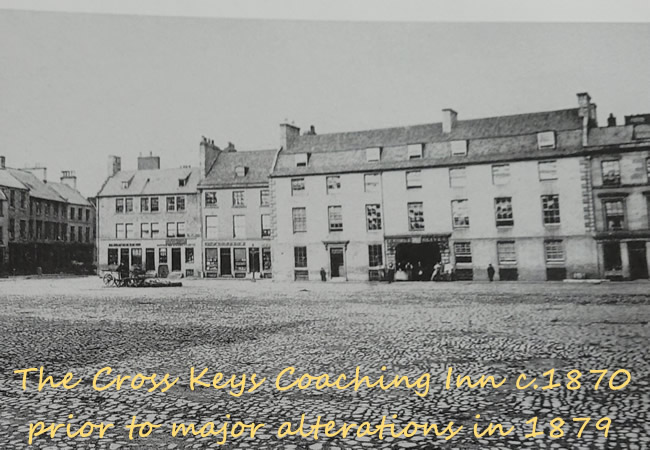 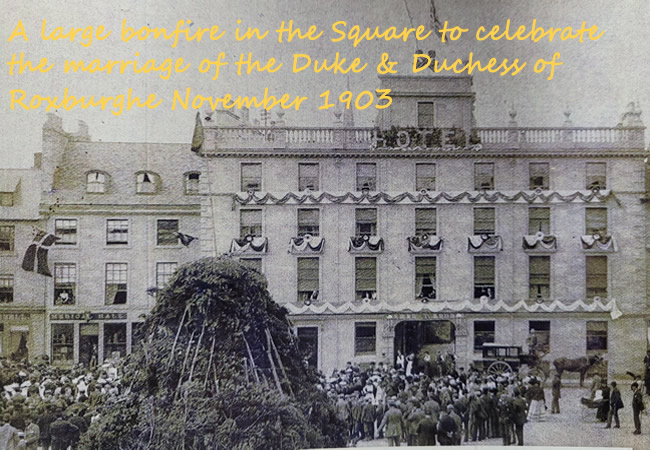 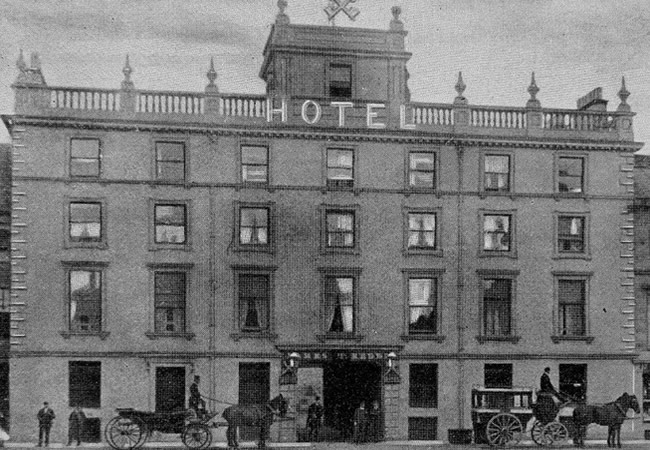 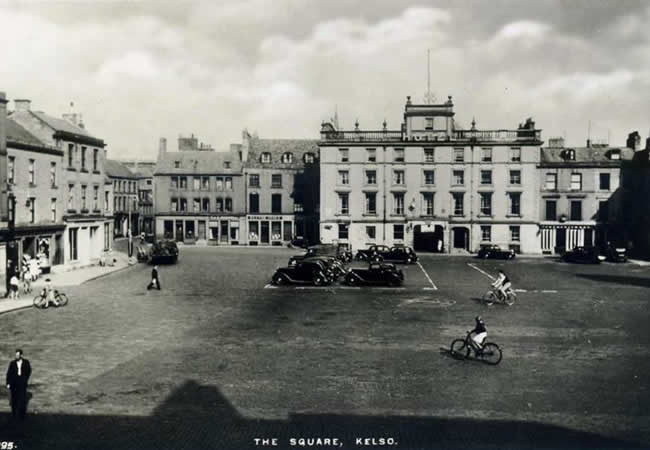 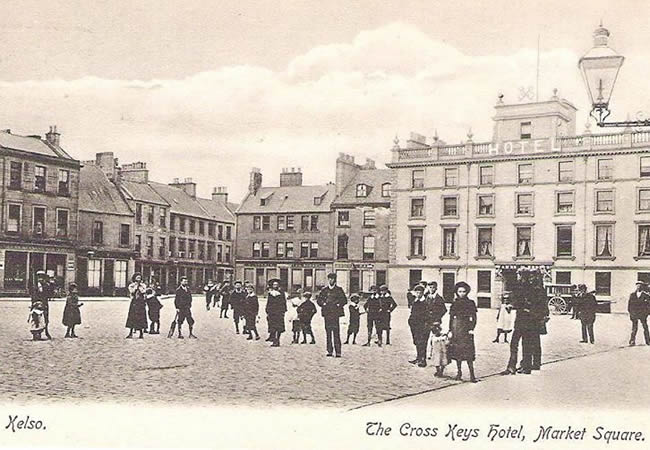 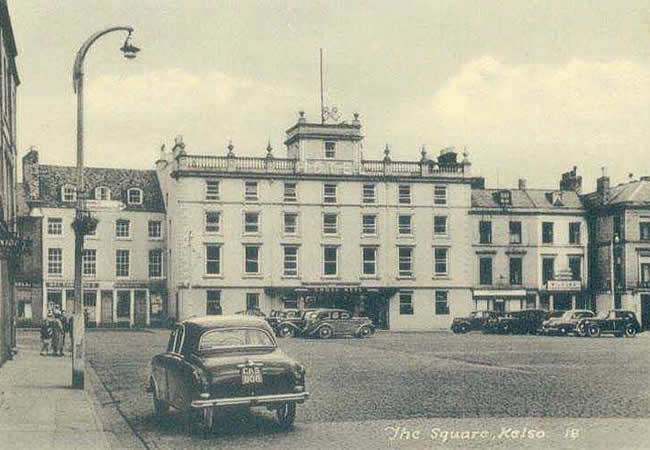 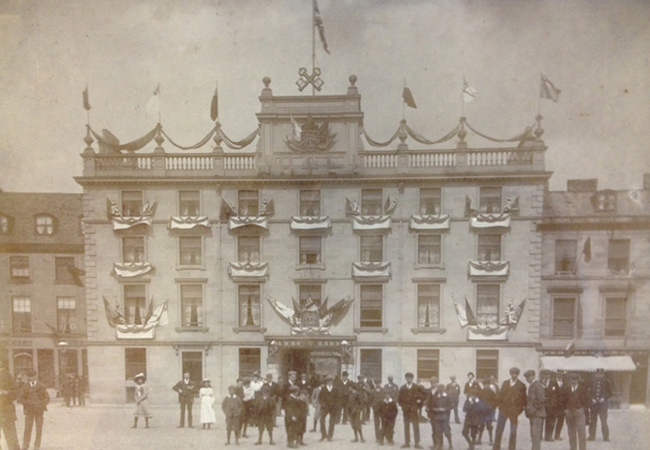 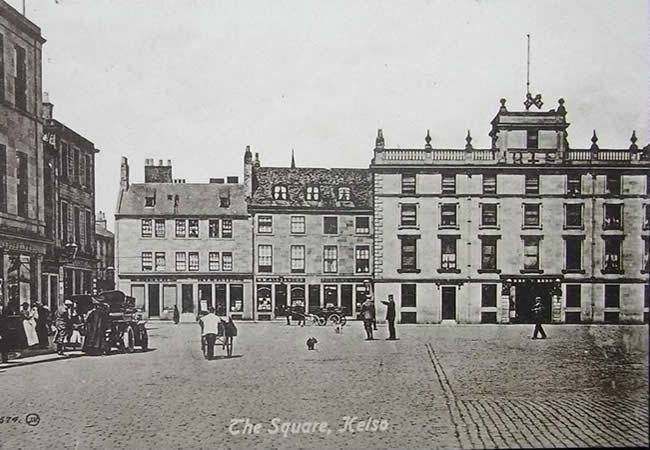 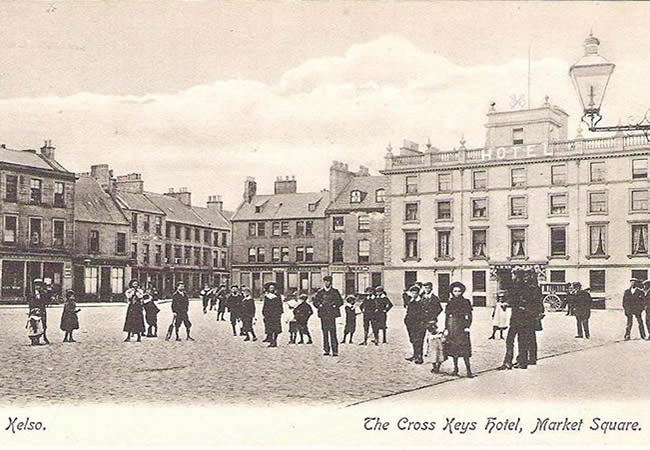 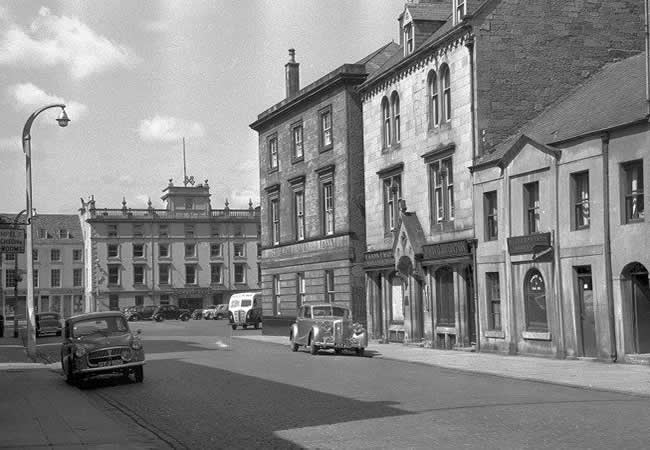